The Ramsey School was designed the architectural firm of Garry& Sheffey. Founded in Bluefield, West Virginia in 1920, the firm was responsible for many historic public and private buildings in both West Virginia and Virginia.1 Their prominent buildings in Bluefield include the Westminster Presbyterian Church, the Hotel Carter (Tyson Towers) and the Elks Building. The firm was also known for building educational architecture. The president’s House at Bluefield State College, Big Creek High School (in War, W. VA.), Bramwell High School and the Marsh Library at Concord State teachers College count among their historic works in this field, but the Ramsey School is perhaps the most famous of their works.

The Ramsey School is nestled in a hillside on 300 Ramsey street in the Bluefield Downtown Commercial Historic District.2 It famously has entrances on seven different levels as a steep road wraps around the school. Views from the school provide a panorama of late 19th and  early 20th century architectural styles. When the district was placed on the National Registry of Historic Places, the survey historian described the district’s unique architecture as including “Italianate Commercial, Victorian Commercial,  Renaissance Revival, Beaux Arts,  Victorian Romanesque, Art Deco as well as others.”3

The Ramsey School was designated as “Pivotal” among the dozens of structures included in that survey. Built as an elementary school in 1925, the survey historian described the Ramsey School as follows:

A large brick Romanesque Revival School, constructed as a result of Bluefield’s first school board levy election. It is separated into three massings that climb the hill. A four story building on the east side, it has a five story central tower and four story west wing. The east wing has two buttresses that divide the elevation into three parts. Windows are 9 over 9 on the second floor, six over six on the third floor, and four ganged 9 over 9 on the fourth. The tower has a large shallow arch for the recessed entrance, which has two double doors with slightly pointed arched transoms.  The parapet is arched and crenelated with a stone cap and a stone shield in the center. A stone carved panel over the entrance arch says “Ramsey School.” The corners have flying stone spouts. The first floor of the west wing has brick bands of rustication.”4

The Ramsey School was closed as a school in 2000, and sat empty for 8 years. It was recently donated to Gary Bowling’s House of Art, a 501C3e non-profit organization. Today it houses an art gallery, art studios and art classes, it is fitting that the Ramsey School is itself a work of art. 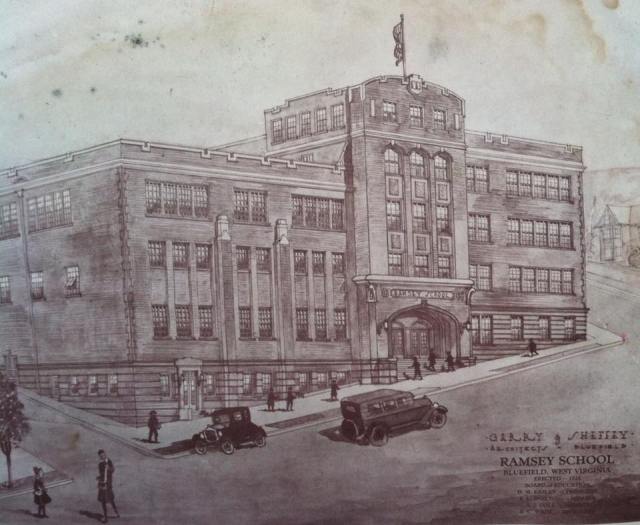